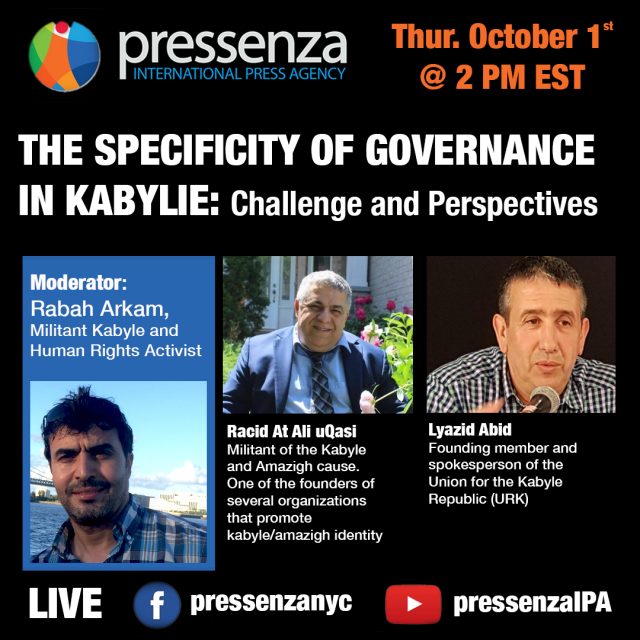 USA (TAMURT) – A live debate, on the Pressenza IDA channel (international press agency), will take place on Thursday 1st October at 2:00 p.m. (United States), 7:00 p.m. (Kabylia). The themes will revolve around the challenges and perspectives of the Kabyle people on the march towards their freedom. It will be about politics, economy, education, secularism, the history of Kabylie and the harmful consequences of Islamism and the Algerian regime on the existence of the Kabyle people. Rachid Ait Ali Oukaci, Kabyle activist and Lyazid Abid, URK spokesperson, will be the guests of Rabah Arkam Human rights activist for a good hour of discussion and debate in front of an English-speaking audience.

Kabylie is an ethnolinguistic region located in the north of Algeria, between sea and mountains, known for its oaks, cedars and olive trees, Kabylia is made up above all of men and women who have nourished its identity through the generations.
The Kabyles people have always vigorously resisted the many colonizers. He fought his land with honor against imperial Roman, Byzantine, Spanish, Arab and French imperial.

Since 1962, Kabylia has been misled by a pseudo-sovereignty that it thinks it holds, since then Kabylia has become the environment most favorable to the claim of Berber identity which refers to an ancestral value system (code of honor) , through the writing, the poetry, the song and the activism of its inhabitants, but the Algerian regime still subjects them to repression.

The economic development of Kabylia is within its reach, on condition that it regains its specificity of governance. Indeed, with the real economic potential at its disposal and which one seeks at all costs to deprive it, is capable, not only of ensuring its own development, but also of contributing decisively to the development of other peoples of Algeria, as long as they are reconciled with themselves and fully enter into progress and modernity.