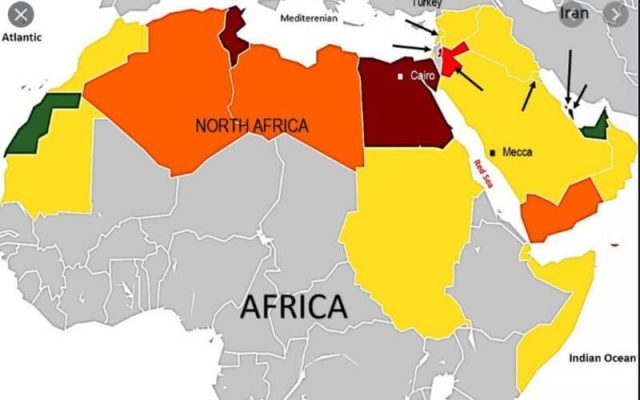 PHILADELPHIA (Tamurt.info) – The American Census Bureau is considering the introduction of the category “Middle East and North Africa” in the upcoming census (2020) and has started a comment period which ended earlier this month. Previously Arab-American could only select the category “white” which is thought to deprive them of proper representationa and funding. The introduction of this categroy is the result of lobbying by Arab-American interests in the US. According NNAAC and other Arab-American leaders in the US this category would include Arabs, Berbers, Kurds , Assyrians, Copts, etc … the Kabyles of America organized around the ACAA and TIWIZI associations have written to the manager at the department of commerce to express their opposition to this proposal, which would equate North Africa to the Middle East and the Amazigh to the Arab.

Dear Ms Jessup,
It has come to our knowledge that the National Network of Arab American Communities (NNAAC) has conducted a campaign to have the Census Bureau include a new category called MENA (Middle East and North Africa). According to NNAAC this category would include not only Arabs but also people living in the so-called MENA region, i.e., Amazighs (referred to as Berbers by others), Kurds, Copts, Assyrians, etc.

My name is Ahcene Larbi. I am the president of TIWIZI, inc a Pennsylvania nonprofit organization founded to help the people of Kabylia, an Amazigh region of Algeria and foster friendship between the American and the Kabyle people. For this reason, I thought it would be appropriate to write to you about the position of Tiwizi and its members. I have already written you on my own behalf.

The Kabyle and the Amazigh in general are the indigenous people of North Africa. While many of them have adopted the moslem religion, they do not consider Islam as their primary identity. Their strong Amazigh culture and secular organization is what defines them. This culture and their way of life has come under threat for centuries by invading conquerors and especially North Africa independent Arab-Moslem centrist states and dictators that do not recognize them and have always tried to suppress their identity and assimilate them.

We think that NNAAC is doing us a disservice by campaigning for this category. Arab centrist states have always tried this inclusion and presented the best Amazigh people as Arabs, but acceptance among Arabs means assimilation to us, which is not acceptable. We do not want to be assimilated as Arabs and certainly not represented by them.

I urge you not to take into consideration the request of NNAAC as formulated as, we think it has a negative impact on all of the people who suffered at the hands of the Arabs.

Thank you for your consideration.