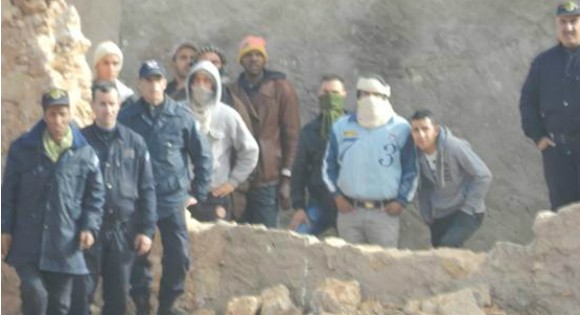 Surprisingly the german public was not informed about the actual events in the prisons of Algeria.

Serious on-line newspapers, like Tamurt or El Watan, informed recently, that two Mozabits, Mr.Afari Baaouchi and Aissa Benschich, militants of the human rights, died  in the prison of Ghardaia. They  belonged to the Imazighen-minority in the southeast of the Algerian desert, the Sahara. .

The people of  the Mozabits represent a particular line in the religious landscape of Algeria.They are called Ibaditen and follow another specific direction than the Sunnits and the Schiits.

They want to maintain their language and identity, like the kabylian people in the north of Algeria, in spite of  a powerful arabization policy  of the panarabic system of Algeria.

The algerian system,  in power since 1962,  follows subtly a policy of destruction of all amazigh people.

In the last time, the gendarmerie and the police of Algeria, have given assistance to the arabic minority, the chambas, for using violence against the mozabits.The chambas have killed numerous mozabits and destroyed partially their cemeteries and commercial stores.

Instead of acting impartialy, the government of Algiers prefers arresting the mozabits, who fight for the human rights.

In the opinion of the « German-Kabylian Friendship inc. » association, human rights are limitless, indépendant of peoples origin and the ruling despots and of course indépendant also from any religious direction.

We kindly ask you,  as the most important organisation of human rights , to intervene at the Algerian government  for these processes and to inform the world public about these events.

Thank you in advance

For the association DKF e.v