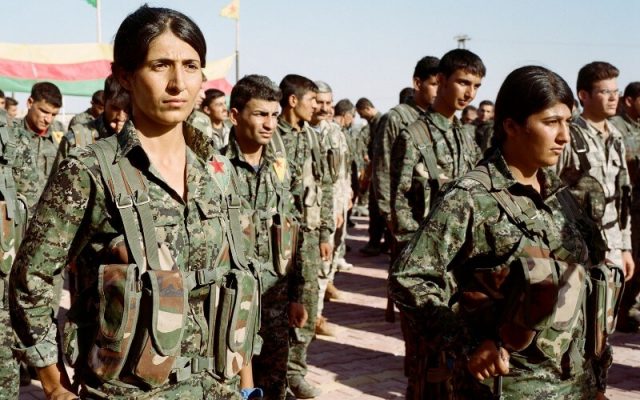 When war reached Afrin last week, it arrived with what its Kurdish residents described as a “curse” that could consume the city and spin the Syrian conflict into yet another dangerous direction.

The clashes that have followed Turkey’s incursion into the border enclave have killed dozens – many of them civilians – wounded several hundred, and led thousands of locals and displaced refugees to flee across ravaged, lawless lands to the south and east.

Their futures imperilled in Afrin and unknown in the rest of Syria, the war’s newest exiles – a disparate and disorientated mix of sects and ethnicities – had hoped to hide from the fighting. But they now find themselves central to a volatile phase shaped by feuding global powers determined to stake their interests in what remains of the country.

The Turkish attack led the Kurdish-led YPG militia – Washington’s main proxy in the fight against Islamic State elsewhere in Syria – to plead with the US for diplomatic pressure and military help. Twelve days later, neither has been forthcoming, leading increasingly embittered Kurdish leaders to claim they are being treated as strategic partners in one part of Syria, but sacrificed to a relationship with a Nato partner in another.

“The silence of the Nato members is unacceptable when one of their members is killing civilians by the dozens,” said Ilham Ahmad, the co-chair of a local Kurdish political group, the Syrian Democratic Council. “By staying silent, they are making a big mistake. The US and Europeans have to remember if it wasn’t [for] the SDF and YPG forces, Isis wouldn’t be on the verge of total collapse in Syria and the region.”

Mohammed Hassan, an Afrin local, said the YPG – which is the lead component of the US-led fighting force known as the SDF – had been told that no help would be coming from the US.

“The Kurds have been a strategic ally of theirs, unfortunately they [the US] seem to be restrained by their relationship with Turkey.

“They are telling the Kurds: ‘Use the weapons we provided you with [in northeastern Syria]’. Erdoğan claimed his operation will take seven days, but he is facing fierce resistance. It will take much, much longer than that.”

Turkish tanks and armoured vehicles earlier this week pushed deeper into northern Syria, escorted by fighter jets. The objective of the move seemed to be to secure a road leading to a Syrian airbase in Idlib province, Abu al-Duhur, that has been held by an Islamist group since 2015.

The push has led Kurds in Afrin and regional observers to claim that Turkey aims to carve out a new reach of influence for itself in the city, in return for forcing Islamists to return the base to Syrian regime hands.

At the same time, Russia, which has played a dominant role in attacking opposition groups and Islamists in northern Syria, is also looking to consolidate gains and establish zones of the north that both Moscow and Ankara directly control.

“The Afrin, Abu al-Duhur air base operation is basically a land swap out of a colonial-era textbook,” said Mohanad Hage Ali, director of communications at Carnegie Middle East. “In which non-state actors, the YPG, and the al-Qaida-linked Hay’at Tahrir al-Sham will have to pay a price by vacating lands they now hold.

“However, the Syrian regime looks poised to gain more. Controlling the base, equipped with 20 fortified aircraft shelters, brings its forces closer to the strategic Saraqeb, located on the international highway which links Aleppo to Damascus.”

“On the Turkish side the rationale is more comprehensive, and perhaps overambitious. Driving the YPG southwards, away from the Turkish borders, would decrease the group’s ability to support Kurdish rebels in Turkey.”

Turkey has also threatened to extend its operation east towards the town of Manbij, the starting point of the US presence in eastern Syria, and a stronghold of the SDF. Ankara’s claims that the northeast and Afrin are effectively led by the PKK, with whom it has fought a four-decade insurgency inside Turkish borders, have dogged relations with Washington for the past two years.

The Pentagon’s announcement in mid-January that it aimed to consolidate its relationship with the SDF, transforming it into a border force post-Isis, sparked anger among Turkish leaders, leading to the incursion, the remit of which is steadily evolving.

Those who remain inside Afrin say the outskirts of the city are being gradually wrecked. “There are destroyed houses all over the town and cars turned to ashes,” said Arin, a resident of Jandaris, a village southwest of Afrin. “There are many displaced families from Aleppo, Idlib and other sides of the country who were living in our town, but now no one knows where to go.”

Ali, 43, a father-of-four from Maryamin village, east of Afrin, said: “Life wasn’t great, but we had a little bit of peace, and our house wasn’t destroyed by this curse in Syria. Now we are going to lose everything, like most other people.”

Hifi Mustapha, a senior official in Afrin, said: “We cannot identify an exact number of casualties. So far 60 civilians, mainly women and children, have been the known victims, as a result schools have closed and there is fear among [people].

“The civilians who wish to flee are allowed, they can go to regime-held territory; however they face a lot of humiliation on checkpoints on the way. [The regime] talks of Syrian sovereignty but are behaving like Afrin is not even a part of Syria. America like the rest, [it] is chasing its gains. The insurgents in Afrin will eventually come back and bite them if they do not help us in this battle.”