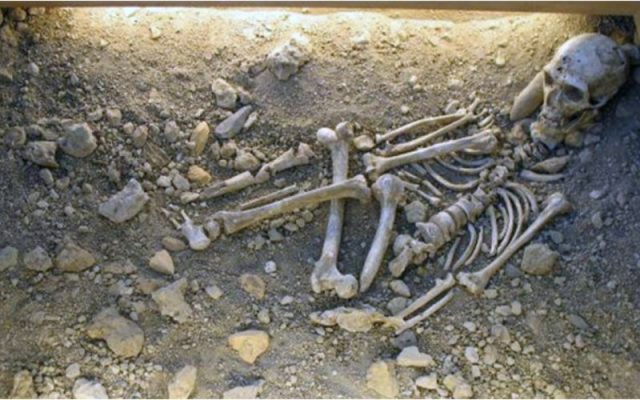 The owner of the property where the site is located, Mr Crif Nat Mulud, a descendant of the famous Kabyle revolutionary Lady Fadma N’Summer, as he proudly introduces himself to a local reporter, said that he was digging for the foundation of a new construction when he ran into a little mountain of bones.

At first, he thought that these must be recent remains from a mass murder dump from one of the wars during the last 1/2 century, speculating on the islamists, or one of algerian military or security services’ execution of people, who were brought here from elsewhere. The number of persons at final count is about 30, and more are expected to be found in the future.

When 1st asked about what he thought these bones were? Mr Nat Mulud with big open eyes confessed “I think these are giants!”
Are there any giants known in the area? “No these from are from far far in the past” – A littlesilence – “They had to be our ancestors, then !” He concludes.

From further conversation, we lear that, almost no feedback was received from the archeological services of the provincial government. “We got an explanation about the 1st site, discovered in the 90s, but not on this one, since it appeares that these are Giants from an era pre-dating the 8th century.” He explained.

During the one time visit to the site an explanation was given to the local authorities who later conveyed it that, at first they thought that it was a Roman Era cimetery, because of a nearby now dry fountain known to be from that era, in the area. But the carbon dating of the items found in the 1990s site revealed a much earlier date. Tese bones are said to be the same era. No efforts to preserve the 1st site belonging to Mr. nezla, the owner, and none are expected for this one either, he explained. A local archeologist explained that it predated the 8th century because of the disposition of the tombs, not organized according to islamic rule. TOmbs of Moslims are all oriented to the east (mecca). In Islamic ritual, the bodies lay on the back, with arms straits down. It is not the case here. These toumbs are random, more specific to a personal choice than some pre-establish rule. In one solitary corner, we found a woman holding an infant. Some tombs had more than one body, something Kabyles still do. Until today, it is common practice that people ask to be beared with a loved one, and their wishes are respected.

Finally an ancient inscription-tablet was also found in the site and, was stolen right after the news about the discovery spread. According to local archeologists, who have studied the ustencils found in the 1st site, these bones and cemeteries date back to even before. Between 1000 to 30 000 years B.C.

As if, any evidence of historical value which may shed some light on pre-islamic history of Kabylia, and north Algeria in general, such archeological discoveries are systematically diminished in importance, and their sites abandoned to fading memory. To official Algeria, life in north Africa at large didn’t begin until the advent of islam. Particularly in Kabylia, which didn’t have any direct encounter with Arabs, sheltered by ruggedness and high-altitude of the Kabyle province.

Inquiries with the Provincial specialized agency, and universities did not hear of the site, despite the village’s mayor visit reporting the site, which prompted the visit of a low level technician for sampling and pictures only. The event may have not even officially recorded.
By A. Wezdad, covering Tuvirett.