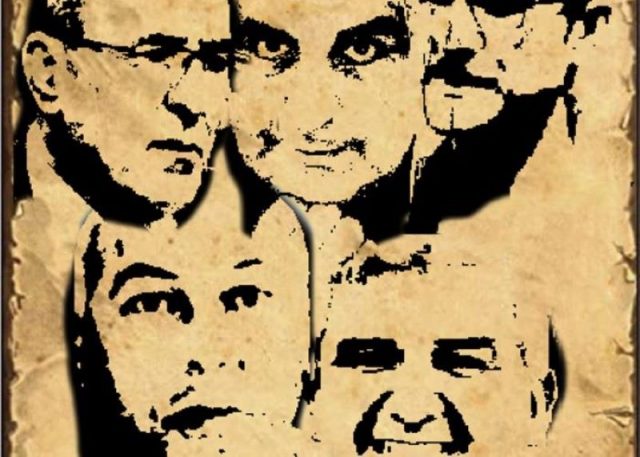 USA (TAMURT) – Their names are Bouaziz Ait-Chebib, Hamou Boumedine, Hocine Azem, Boussad Becha, Belaid Amar-Khodja, and Nordine Ait-Hamouda. They have been summoned by the local Gendarmerie (military police) without any explanation, and upon their arrival, were hand-cuffed and immediately placed in custody. Nordine Ait-Hamouda was picked up as he was leaving the venue where he had just given a conference. Before them, a slew of other Kabyle and Hirak activists were arrested. They were charged with “terrorism”, “threat against national unity”, “threat against the integrity of the national territory” and thrown in jail.

This was all done by virtue of the articles 79 and 87 bis of the penal code. Article 87 bis was introduced via a presidential ordinance and passed into law on June 10, 2021. Yes, Algeria is a country where a president can change the law to suit his goals. This article 87 bis broadened the definition of terrorism and established a list of terrorist entities (organizations, individuals). In May, before even the publication of the amendement, the High National Security Council classified the MAK (Movement of the self-determination of Kabylia) and Rachad (an Islamist Movement) as terrorist organizations.

Introduced to crush any opposition to the regime, it is specifically intended to outlaw any demands of emancipation from the Kabyle people. This same article targets any speech that is deemed a national security threat or a threat to the “integrity of the national territory” of Algeria. Thus, the freedom of speech guaranteed by the Constitution is shoved aside and numerous law-abiding citizens, outstanding, peaceful members of society now belong in jail.

The efforts of this new administration are obviously to crush any opposing voices (mainly from Kabylia) but they are also preventative as they are intended to instill fear in the population to stymy any attempts at revolting.
Tiwizi is shocked by the new escalation in the regime’s crackdown and the suppression of freedoms, even those guaranteed by the Algerian constitution and international treaties Algeria is party to.

Tiwizi stands with those who were arrested and their families and pledges to do all it can to help the victims and condemns these violent attacks against human rights. Tiwizi calls on the Algerian judges to assert their independence and guarantee a fair trial. It also calls on all human rights organizations and supporters of human rights in the World to speak against Algeria’s treatment of Kabyle activists and citizens.

Tiwizi is a non profit organization established in Pennsylvania for charitable, educational and human rights purposes. It promotes friendship between the Kabyle and American people.

The Board of Directors
Philadelphia July 11, 2021